We detect you may be browsing from a country which is NOT serviced by Life Extension Asia. 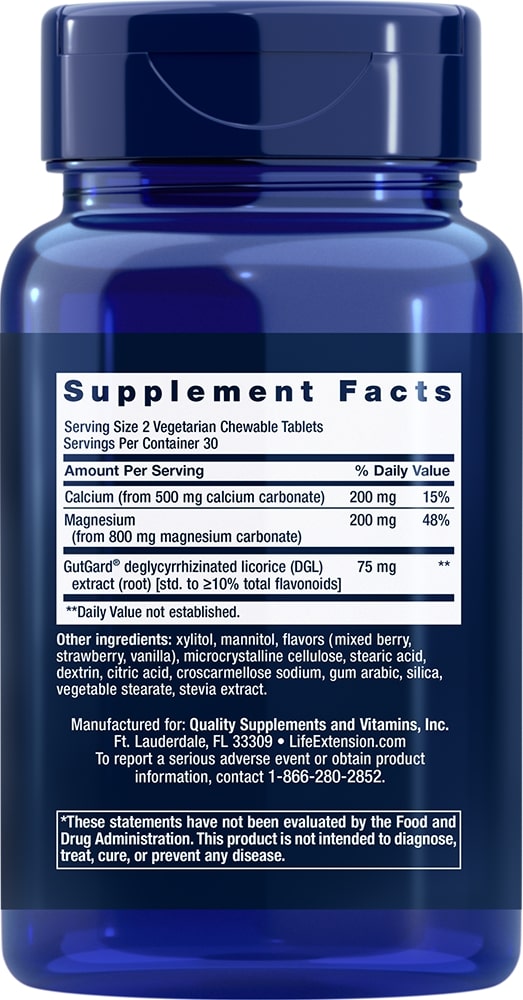 Our EsophaCool™ formula combines a special licorice root extract and calcium carbonate to provide on-the-go support for the delicate lining of your esophagus and healthy digestive function. EsophaCool™ also delivers magnesium, which is depleted by traditional digestive support regimens.

Each day, millions of American adults experience gastroesophageal discomfort caused by stomach acid rising into the esophagus.1-3 Many traditional regimens designed to address gastrointestinal discomfort can disrupt the body’s healthy digestive processes, impede the production of stomach acid and lead to nutrient deficiencies—particularly in magnesium.

Focusing on the esophagus, not the stomach

Pre-clinical research suggests that licorice root extract can help promote gastric health, which can help support the esophagus.5 The flavonoid molecules in deglycyrrhizinated (DGL) licorice encourage a healthy inflammatory response to support esophageal health by inhibiting the production of pro-inflammatory signaling molecules such as leukotrienes, prostaglandins and interleukins.6,7

Licorice itself has also been shown to support healthy concentrations of compounds that promote mucus production, which may provide an improved protective barrier between the delicate lining of the esophagus and the acidic stomach contents.8

Research indicates that chewable calcium also supports the strong, healthy muscle movement of swallowing that keeps digestive fluids in their rightful place, helping to block the backward flow of fluid from the stomach.10

EsophaCool delivers magnesium carbonate, which adds further support for esophageal comfort. It also provides supplementary magnesium, which is frequently lost from the body during the use of traditional gastric discomfort regimens.11

Dosage and Use Chew two (2) tablets two to three times daily as needed, or as recommended by a healthcare practitioner. Do not swallow tablets whole.

Caution If taken in high doses, magnesium may have a laxative effect.